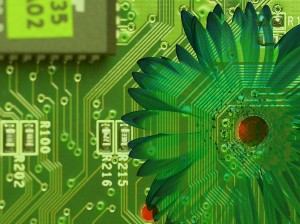 Technology is an integral part of our goal to make the Earth a greener place. We are now able to work from home by teleconferencing thereby using less fuel in our cars and airplanes. We are able to save trees by opting to receive our bills electronically.  Using these examples, on the surface it looks as if we are making a choice to live in less energy intensive ways.

As data centers house more and more data in the ‘cloud’, more and more electricity is required and consumed.  3% of the electricity produced in the U.S. is giving power to data centers.   Apple’s new iData Center in North Carolina is going to require enough electricity to power 80,000 U.S. homes.  The appeal North Carolina has to Google, Apple and Facebook comes from local utilities companies offering attractive electricity prices for coal and nuclear power after the loss of textile and furniture manufacturing companies.

With the rising need for more and more data centers, therefore more power, principals in the IT sector are working to use less ‘dirty’ energy and develop greener forms of energy.  Data centers are being designed now to use ‘free cooling’, the use of outside air instead of high energy consumers, chillers to keep servers from overheating.  i/o Data Centers is putting in 5000 solar panels on it facility in Phoenix.  i/o will also have thermal storage technology that will reduce the energy drain of cooling during the heat of the day.  Google has signed a 20 year agreement with a wind energy company in Iowa.  In Iceland, GreenQloud, a hosting and storage company, is powered by geothermal and hydropower energy.

In 2010 Greenpeace published “Energy [R]evolution 27, a practical blueprint for the worldʼs renewable energy future“.  “Energy [R]evolution” demonstrates a pathway for the world to phase out fossil fuels and reduce CO2 emissions, while ensuring energy security. In order for IT to truly be green, renewable energy sources such as wind power, solar power, hydro-power, bio-energy, geothermal power and marine/oceans power have to be deployed to replace dirty fuel.